Casa de la Torre is a 16th century building. Its name is due to one of the towers of the old fence that surrounded the town of El Toboso (ordered to be built by the Master of the Order of Santiago D. Vasco Rodriguez de Coronado in 1338).

Throughout the centuries the building was a family home, farming and ranching. The family’s house, stables and cellar were located on its grounds.

Isabel Fernández Morales, the heart and soul of Casa de la Torre, found here the place to give life to a dream cradled for years.
Since 1995, after a major renovation that transformed the historic Casa de la Torre into an Inn / Museum full of charm and comfort, Isabel has received crowds of curious and restless travelers, who cross La Mancha encouraged to look for the footsteps of D. Quixote for this land full of history and culture, or to take steps in time through the tradition that is breathed and lived in this place.

The gastronomy served is made with the most significant La Mancha products, some of them cited by Cervantes and others discovered and faithfully interpreted by Isabel, who on her travels through the region has been collecting from the La Mancha grandmothers and then testing them herself. Furthermore, Isabel enjoys giving the dishes names like ‘pisto lagunero’ (tomato and vegetable dish), ‘pinizcos de la Tolosa’ (cream pastry), ‘bacalao del Caballero’ (cod with tomato and potatoes), ‘mojete de la Molinera’ (tuna, garlic , tomato, pepper, egg, and olive oil dipping dish), ‘stuffed pigeon’ ”. Enjoy the ambience of La Casa de la Torre and discover our relaxing accommodations.

In the courtyard of the farmhouse a multifunctional lounge with fireplace and piano has been rebuilt, available for dining or conference room services. The furniture set is from the 19th century.

A very cozy corner, derived from an old kitchen, for small meetings, late-night talks or to have a good local wine with a “tapa manchega”. The table is original from a 19th century pastry shop where tasty almond pastries were made.

capacity of 6 people for meals, meetings, apertifs, and talks 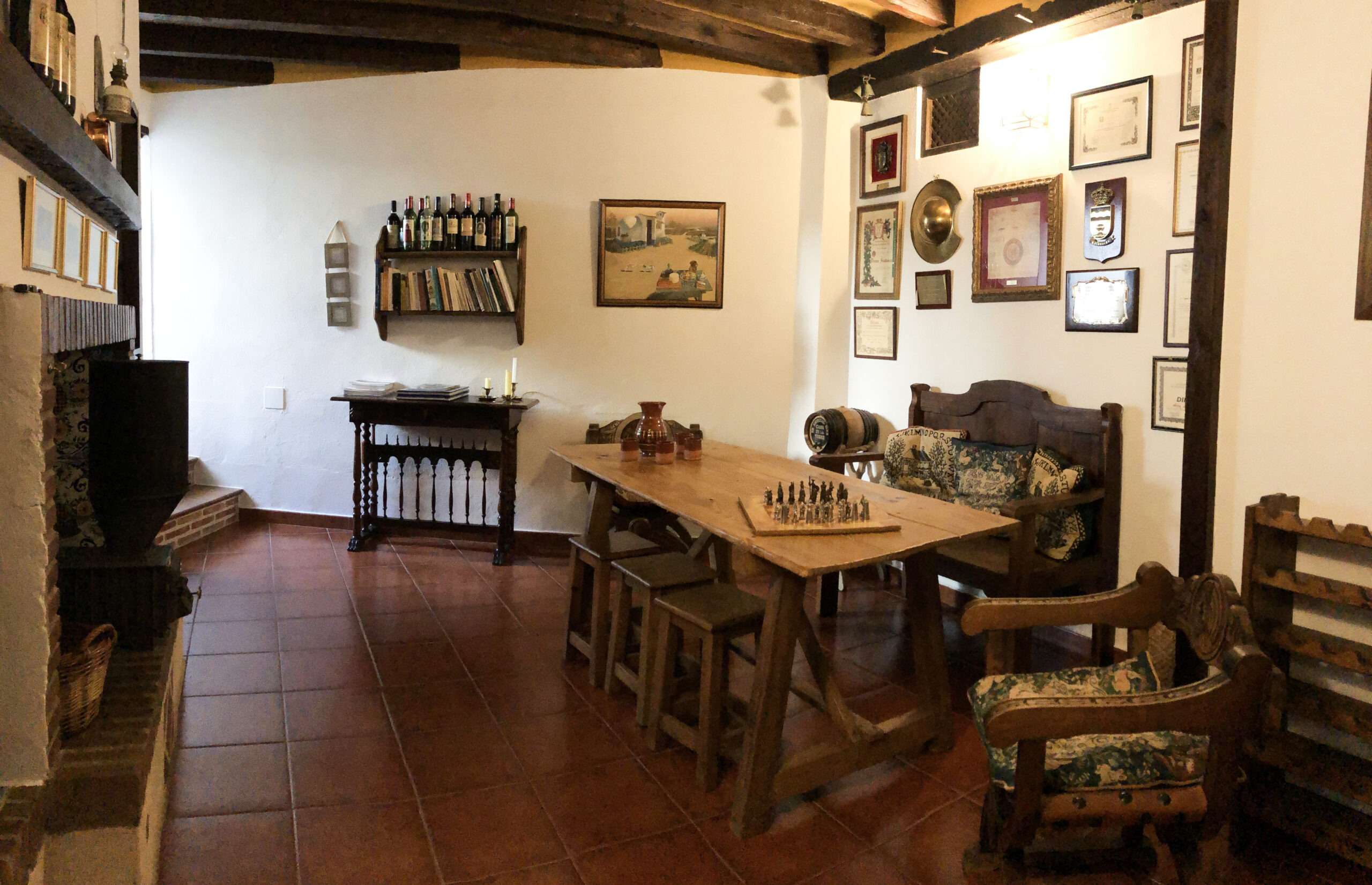 Installed in the old main room of the house, the library contains an interesting collection of editions of Don Quixote in different languages. The walls show an unpublished collection of illustrations on Don Quixote.

It caused us great sorrow that Don Quixote’s chivalric book had the end… «We got in touch with the wise man Freston and asked him to give us back the room with the books that he had stolen from the “manchego hidalgo”.»
A document from Casa de la Torre dated 1850 speaks of the library of the priest D. Isidoro Arias decorated with Renaissance furniture. We have been able to recover original elements from those times to return them to their space.

space for photos and awards or diplomas 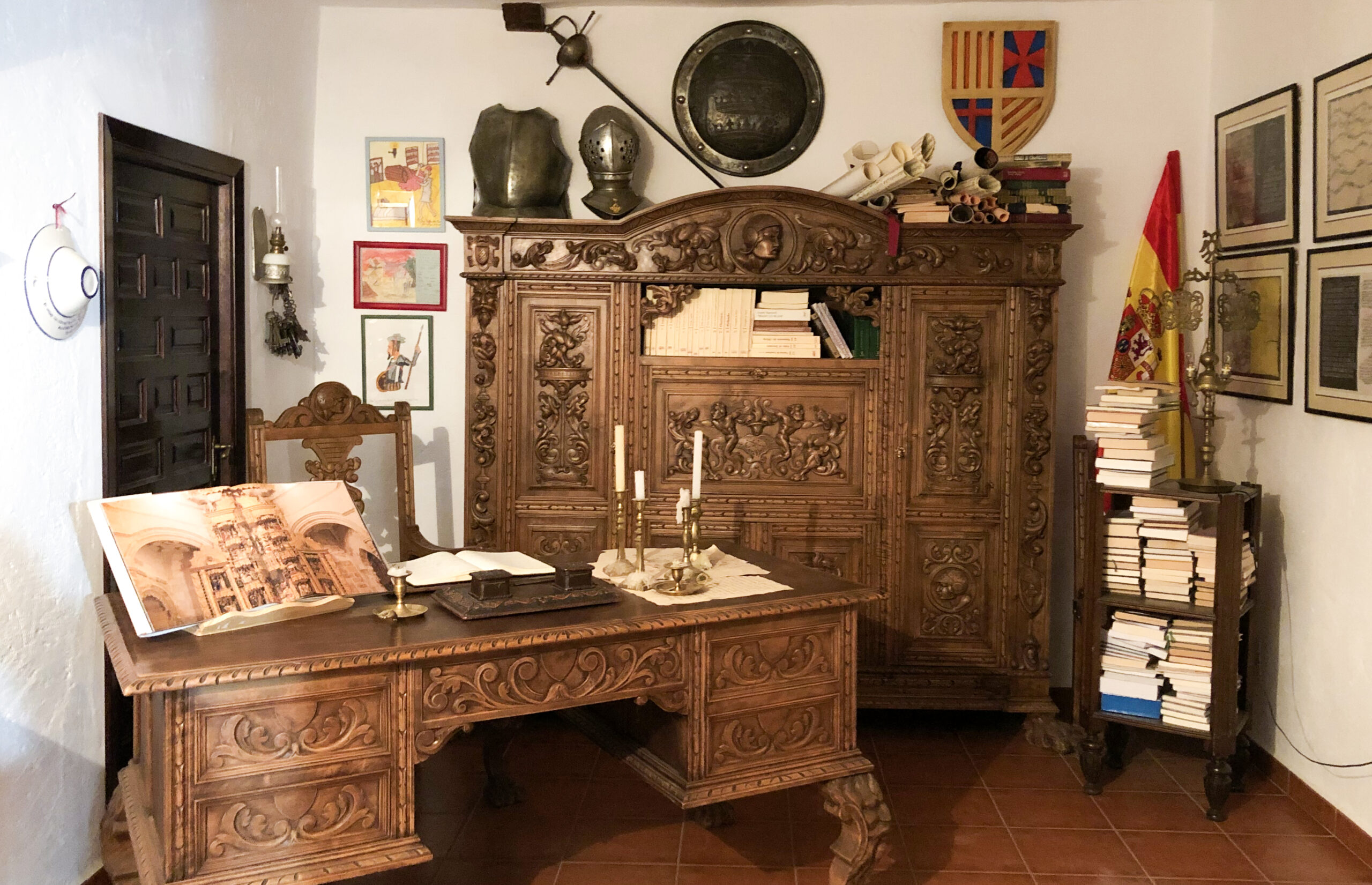 Obtained from the old patio of the farmhouse, this space has been enclosed with a glass cover, which filters a warm and relaxing light throughout the day. Accompanied by a background of classical music, it is made to enjoy a good read, a moment of rest, a quiet chat.

for social gatherings and snacking
wi-fi

The heart of the house, the 16th century patio still preserves its original structure and houses the well that gave drink to travelers who walked along the silk road, from the Imperial City to Cartagena.

capacity for 30 people to meet outside
video recordings
wi-fi

A wrap-around balcony can be used as a gallery for conferences in the outdoor patio or as a place to rest and read.

Each bedroom features a different time period, manifesting a love for decoration. The furniture in the rooms of Casa de la Torre are part of the memories of our grandmothers’ bedrooms, which lead today’s traveler to rest, sleep, desire, love, meditation, reading, the search for oneself…

The main entrance to the house, open to the outside patio, is a corridor that enjoys a special light and that for this reason has also been used for exhibitions of paintings and other works of art.
Scroll to top